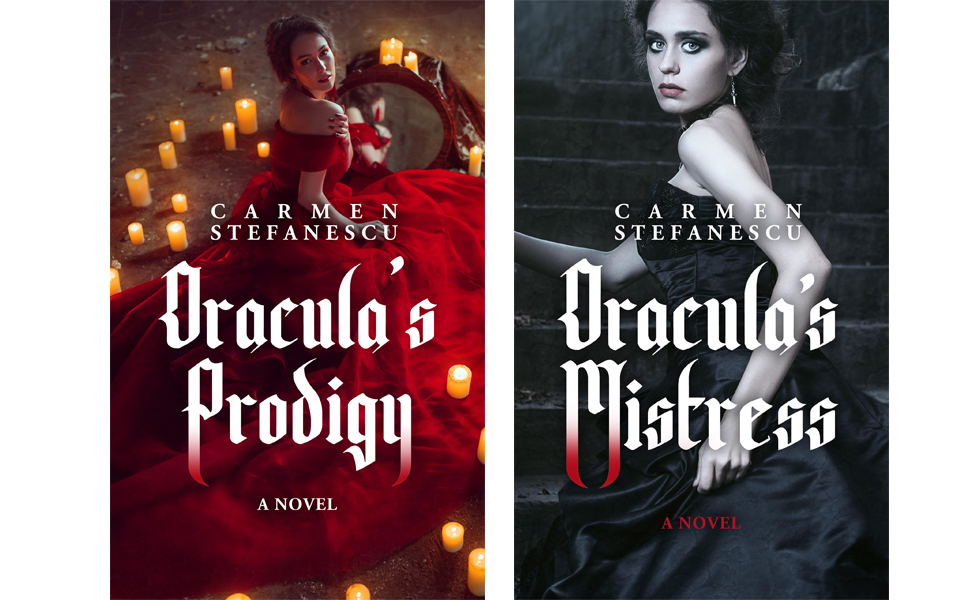 I greatly thank my kind host for inviting me to speak about my book Dracula’s Mistress.
It’s, in fact, a two books series – Dracula’s Mistress and book two, Dracula’s Prodigy.
( Both available on
https://www.amazon.com/dp/B06XNW7RXD/ref=sr_1_1?s=digital-text&ie=UTF8&qid=1489663418&sr=1-1 at 0,99$)
By the way, have you ever thought that the blood of someone famous, whose name inspires, even nowadays, a feeling of admiration, or unease or dread may be flowing through your veins? No? I must admit that I haven’t either, till I wrote the novel Dracula’s Mistress and, come to think of it, Dracula’s blood may flow through my veins, too, as I am a native of his country.
I live in Romania, exactly in the area that was called, during Vlad’s time, Wallachia.
There are so many books on Vlad the Impaler. All are written by foreigners. So I thought why not a novel on this subject written by one of his country people.
Dracula’s Mistress is a cross-over – part historical, part paranormal ( ghosts) and a dash of romance that will awe legions of fans of Gothic literature, paranormal and historical fiction.
It is the story of powerful, brave, merciless Vlad III Basarab, a descendant of the Draculesti family, the ruler of Walachia during the Middle Ages, better known to most people as the infamous vampire Dracula.
From the day he ascends to the throne he knows only battles, betrayal and intrigue. A thick web of lies and slander surrounds Vlad.
He has to fight his own demons, and face endless conflicts: with the Walachian landlords – dedicated to throwing him down the throne, with the Ottomans- for whom Wallachia is a tasty morsel, with allies or friends who turn into enemies, with his family and his own desires.
One of Vlad’s major opponents is his own brother, Radu the Handsome, who is in excellent terms with the Sultan, Mehmed. It’s a well known fact that Radu became Mehmed’s intimate friend while the Sultan Murad kept him and Vlad hostages at the Sultan’s court, years before.
Radu and several of Vlad’s opponents, by means of threat and blackmail, “gather proofs” claiming Vlad is no longer a normal being, but a blood drinking vampire; a danger for the community and the country. They spread the lie, the outrageous slander making people whisper and gossip about their ruler, nicknaming him Dracul/the devil.
My intention isn’t to destroy the vampire myth. Not at all. I want to show the historical, social and political circumstances that made Vlad III Basarab aka Vlad the Impaler, aka Dracula a harsh, cruel ruler.
He was as cruel as other kings of those times.
Vlad was an honest, right man who loved Wallachia and its people. His cruelty is justified by the horrors and sufferings he endured all his life. Vlad suffered much at the hands of the Ottomans. He was tortured for part of that time, and was locked up in an underground prison. It was during his hostage years, at Murad’s court, that Vlad witnessed the impalement punishment.
As a native of Vlad’s country I offer an original view on the character, at the same time weaving customs and traditions specific to Walachia, present day Romania, in the story.
Dracula’s Mistress is based on real historical people of Middle Ages:
Vlad III, Prince of Walachia (1431–1476/77), posthumously dubbed Vlad the Impaler (modern Romanian: Vlad Țepeș, pronounced [ˈvlad ˈt͡sepeʃ]),
Radu III the Handsome or Radu III the Beautiful (Romanian: Radu cel Frumos), also known by his Turkish name Radu Bey (1437-1439—1475), the younger brother of Vlad Țepeș,
Stephen III of Moldavia, commonly known as Stephen the Great, (1433 –1504) Prince of the Principality of Moldavia between 1457 and 1504,
Mehmed II, Mahomet II, or Mohammed II (1432 – 1481), best known as Mehmed the Conqueror (el-Fātiḥ), an Ottoman sultan who, at the age of 21, conquered Constantinople (modern-day Istanbul) and brought an end to the Eastern Roman Empire, and
George Kastrioti Skanderbeg (1405–1468), an Albanian noble and a former member of the Ottoman ruling elite, who curbed the Ottoman expansion into Europe between 1443 and 1468.
The rest of the characters – Angela, Marin Craioveanu, Maritza – and events in the book are my creation.
Lovely, smart, determined, Angela Oltenescu ignores all the aggressive rumors and her mother’s warning regarding Vlad. Will she suffer the consequences of falling in love with a man nicknamed Dracula by his enemies—an infamous creature of the night?
Though the action takes place in the 15th century, readers will discover themes of interest even nowadays –the Muslim invasion, the schism between the various branches of Christian churches, the greediness of neighboring countries towards Romania.
Book two, Dracula’s Prodigy, takes place in USA, in Transylvania county, North Carolina, six hundred years later. Even so readers will met a couple of characters from book one. Like book one, it is a cross over novel – light historical, light horror, light romance.
I’m glad to live in a country known to everyone, be it only because it’s linked to a name bearing negative connotations: creatures of the night, crimes and horrors, fangs, sucking the blood of maidens. Dracula is said to have drunk his victims’ blood, terrified his enemies and turned into a bat at will. The border between legend or history and figments of people’s imagination is difficult to perceive in his case.
There are many people in Romania bothered by this analogy, Romania – Dracula’s country. I’m not. I’m proud to be one of his country people. And I chose to think about Dracula as a symbolic personality, a hero, a true leader, who used harsh, yet fair methods to reclaim the country from the corrupt and rich boyars.
I wish there lived another man like Vlad in his present-day country!
Carmen Stefanescu
2018